A student and current Army Cadet at Ark Alexandra Academy was recently involved in an emergency first aid incident outside of school. The school receptionist took a call from Mrs. Tumi, she was in the park yesterday afternoon and her 3-year-old son hurt his head quite badly after a fall. Mrs. Tumi was quite panicked as there was a lot of blood and her son needed medical attention. A year 11 student from Ark Alexandra came straight over and told her he was a first aider, she didn’t get his name initially but said he was wearing glasses and she knew he was from year 11 as he was wearing a shirt that had been signed on leavers day. The academy later identified him as Cadet Raghav Mehta.

Mrs. Tumi said there was a group of year 11 students and they all helped out, they were instructed by cadet Mehta to go to the café to get bandages, and the cadet then bandaged the wound on his head. They were helping to calm her down which really meant a lot as Mrs. Tumi said she really didn’t know what to do.

Mrs. Tumi would like to say thank you to them all as they were all incredible but especially that particular year 11 boy, she said they are all a credit to our school. Later identified as Cadet Mehta. Cadet Mehta who has received his first aid badge in February 2020 had been recently helping the new recruits with their first aid training.

Cadet Mehta said that, “I saw the child crying then saw the mother running over upset. I stopped for about 3 seconds then rushed over to help. I sent people to the bandstand cafe to get medical provisions and water and I tried cleaning the site to see where the blood was coming from. When I could see the cut I then began to apply compression bandages to stop the bleeding. I spoke with the 999 operator and, when they said it could take 2 hours, offered to carry the boy to a car so they could get him to hospital.

Cadet Raghav the following morning contacted the school, “I was more worried about how the child was now and was relieved when I said the school had spoken with the parent, and the child was fine.

Cadet Raghav has since received the Combined Cadet Force Association National Praiseworthy Action Certificate for his immediate actions. Contingent Commander 2nd LT Burchell presented the award to Cadet Raghav in front of his peers during the cadet's training evening. 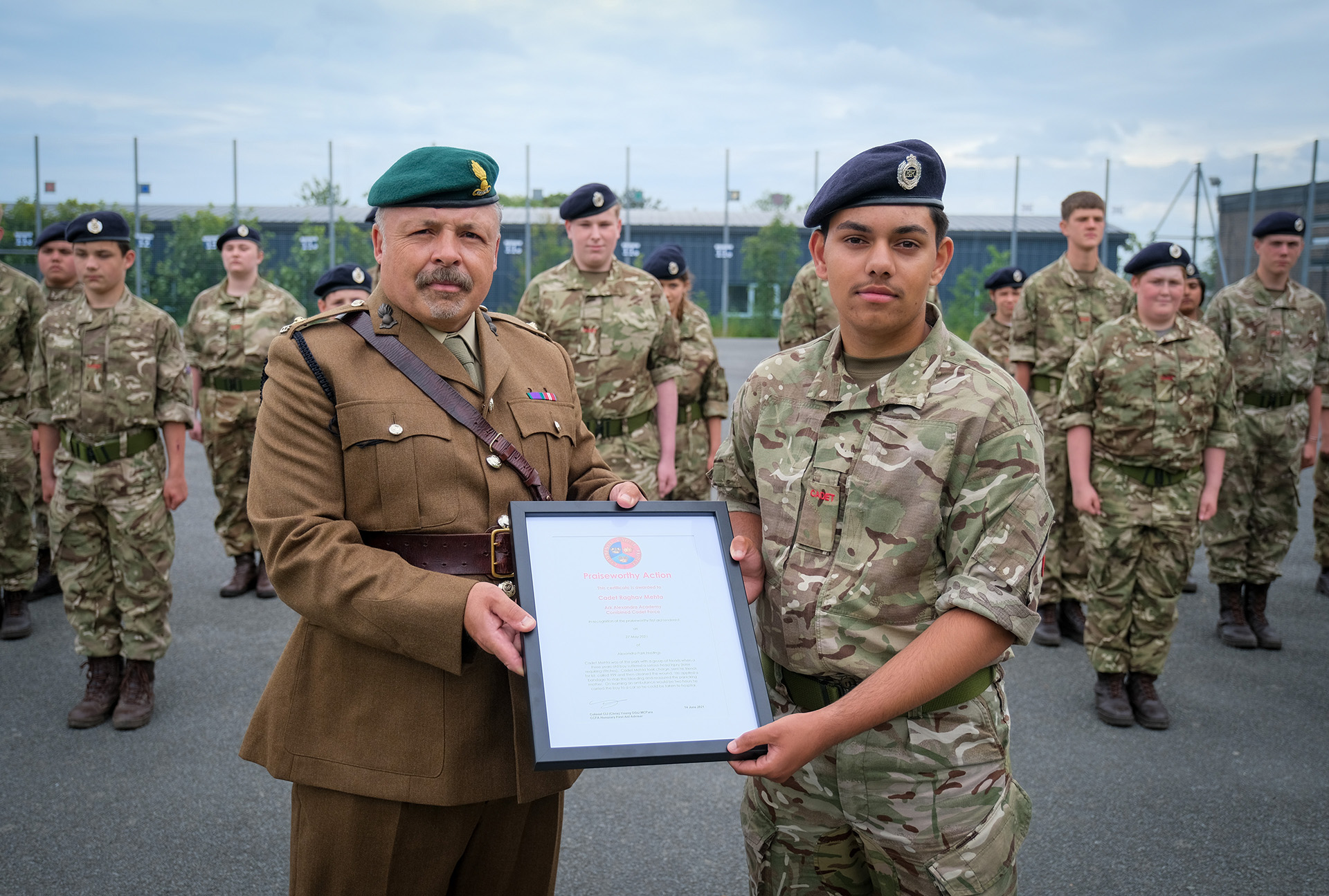 What a year! It's Prom 2021 and Year 11 is celebrating. We wish you a wonderful summer break.
Students are enjoying a beautiful, sunny non-uniform day as we're raising money for Macmillan Cancer Support.
Students are coding the instructions in Mr. Hickey's Robot Rescue to save the lego people from disaster.
https://www.ark-spark.co.uk/ gives information about SPArk alongside general resources to help parents support learning at home.
We have a Mufti-Day this Friday 16th July 2021 in support of Macmillan Cancer Support.